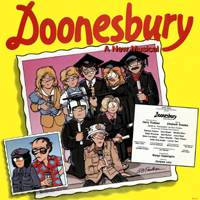 (2 / 5) For the stage musical version of his political-satire comic strip, Garry Trudeau fashioned his own book and lyrics, proving himself to be a surprisingly adept lyricist. He elicits honest laughs with “Another Memorable Meal,” about Mike Doonesbury’s pathetic culinary attempts, and “Complicated Man,” in which Honey and Boopsie torch about their difficult boyfriends. Nor does Trudeau leave out the satire, scoring anti-Reagan-era points in “Real Estate” and “It’s the Right Time to Be Rich.” Unfortunately, these savories are wedded to the shapeless, tuneless rock meanderings of composer Elizabeth Swados, who also did the clattering orchestrations. And while this is nominally a book musical, there’s very little narrative or character development in it; the ballads bob around on the surface, sounding like nothing more than Lite-FM selections. As rock musicals go, this one has more vocal power than most: Laura Dean’s Boopsie is a standout (especially in “I Can Have It All”), and Ralph Bruneau displays an attractive high tenor as Mike. Broadway notables Mark Linn-Baker and Barbara Andres get their chances, too, although the latter is paired with the vocally uncertain Kate Burton in an unmoving mother-daughter reconciliation number. The show was a bit small-scale for Broadway, which may have accounted for its short run, but the cast album is an evocative, cheeky time capsule. If there were some way to divorce Trudeau’s lyrics from Swados’ music, I might revisit it more often. — Marc Miller