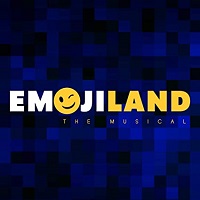 (2 / 5) This recording represents the Off-Broadway production of Emojiland, a knowingly campy musical that proudly planted its digital freak flag on the theatrical landscape. In an era when even many Off-Broadway ventures are crafted for mainstream appeal, usually in the hope of receiving a transfer to Broadway, it’s somewhat refreshing to listen to this cast album of a show that has no objective other than to entertain through humor and absurdity. How successful it is at doing so is another matter. Written by Laura Schein and Keith Harrison, the musical takes its title from the ideograms that have become so popular in the age of communication through digital devices. The story explores a world populated by these emojis — including such favorites as Kissy Face and Pile of Poo — as they grapple with the disruption of their society that has resulted from the latest software update. Though the show’s plot touches on major themes like xenophobia and prejudice, Emojiland has no intention of being any meatier than a bag of gummy bears. Schein and Harrison’s upbeat score appropriately leans towards techno-pop, and if their lyrics aren’t laugh-out-loud funny, they’re contentedly witty and keep the fun going. Emojiland also benefits from a cast that appears game for the ridiculousness of the piece, led by Schein herself as ingénue Smize. Lesli Margherita and Josh Lamon, in particular, give ingenious comedic turns as the emojis Princeess and Prince, respectively. Like any sugar rush, the show starts to wear itself out rather quickly, and once Lamon and Margherita finish letting loose with the Act 2 opener “Firewall Ball,” the album becomes something of a chore to finish. But even if it doesn’t stay with you for long, Emojiland offers lots of fun in the moment. — Matt Koplik