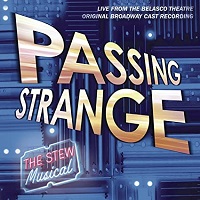 (4 / 5) Passing Strange is the semi-autobiographical work of singer/songwriter Stew, co-written with his longtime collaborator Heidi Rodewald. The story follows Youth,  a young black man played by an explosive Daniel Breaker. Anxious to be an artist and eager to search for what’s real in the world, Youth leaves behind his life of comfort in a California suburb for the exoticism of Europe. In doing so, he ends up cutting ties with everyone in his life — including his loving if not completely understanding mother, a role sung with warmth by Eisa Davis. On stage, Passing Strange was a highly energetic experience for audiences, but also a divisive one. This cast album, recorded live at the Belasco Theatre where the show played, will most likely prove divisive as well. First time listeners may be confused: There is very little dialogue between songs, leaving major gaps in the plot, and the method of the storytelling constantly changes so that characters either sing to each other, about each other, or from the point of view of the Narrator (played by Stew), often within the same song. However, to dismiss Passing Strange because of its non-traditional structure and its difficulty to categorize would be to ignore everything else that the show and this album have to offer. Stew and Rodewald’s music, which they also orchestrated, pulsates with creativity and spirit, whether permeating the air with soothing, lilting ballads such as“Keys (Marianna)” and “Come Down Now” or working up a sweat in “Keys (It’s Alright)” and “Mom Song.” As for Stew’s lyrics, they are artfully crafted while also conveying real emotion and conflict. Before the Broadway production of Passing Strange closed, Spike Lee filmed it; that film can be sought out by anyone who would like a more comprehensive understanding of the piece, and it also allows a greater appreciation of the work of the phenomenal cast. But even on stage, Passing Strange was less concerned with the details of its story than with the emotional potency of its journey. Perhaps if neophytes approached the recording as more of a pop/rock concept album, like Tommy or Jesus Christ Superstar, they’d have a clearer idea of what to expect from this highly creative work. — Matt Koplik