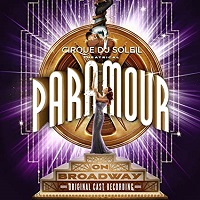 (2 / 5)  With its spectacular entertainments showcasing nouveau-circus acts of all types, accessorized with top-drawer production values and very listenable if somewhat bland music, Cirque du Soleil has experienced great success over the decades since the company’s birth in Quebec in 1984. But Cirque did not have a hit with its 2016 attempt to create a Broadway musical incorporating the sort of acts (aerialists, acrobats, etc.) for which it has become world famous. The show was called Paramour, or rather, Cirque du Soleil Paramour, and simply reading the credits is enough to give one pause. Believe it or not, no book writer is listed, with West Hyler acknowledged only for the “story” and as “scene director.” (So, who wrote the dialogue?) As for the score credits, here you go: music by Bob & Bill (????), co-composer Andreas Carlsson, assistant composer Martin Laniel, lyrics by Andreas Carlsson, additional lyrics by Jenny Stafford. The resulting mess of a show purported to tell a tale of “The Golden Age of Hollywood,” though there were countless anachronisms in the dialogue and only intermittent nods toward period authenticity in the score and the design elements. The plot, such as it is, has the megalomaniacal film director A.J. (Jeremy Kushnier) discovering a potential new movie star in nightclub chanteuse Indigo (Ruby Davis), leading to lots of clichéd goings-on while the audience waits to see if our heroine will eventually end up with her pianist/songwriter, Joey (Ryan Vona), the nice guy who adores her. Given this show’s pedigree and the fact that Cirque did not feel it necessary to hire anyone with traditional musical theater talent or experience to put it together, the cast album is more pleasing if you approach it as a collection of pop songs rather than a recording of a score written to serve a cohesive and compelling narrative, which is certainly not what we have here. From that perspective, three of the most enjoyable items are “A.J.’s Blues” and “The Muse,” both performed for all their worth by Broadway veteran Kushnier; and “Something More,” a pretty ballad persuasively rendered by Davis in her Broadway debut. On the minus side, “Everything (The Lover’s Theme)” and the opening number, “The Hollywood Wiz,” are too generic to make much of an effect. The same might be said for the bulk of the score.   — Michael Portantiere