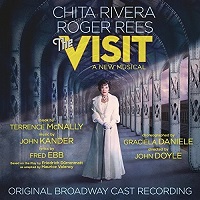 (4 / 5) The Visit is an extraordinary late-career work by composer John Kander and lyricist Fred Ebb, who enriched the American musical theater with multiple scores of excellent quality over a 40-year period. In partnership with book writer Terrence McNally, their previous collaborator for The Rink and Kiss of the Spider Woman, Kander & Ebb crafted a flawed but compelling adaptation of Friedrich Dürrenmatt’s play about Claire Zachanassian, a fabulously wealthy old woman who returns to the town where she grew up and offers to save it from financial ruin if the citizens will be the agents of her ultimate revenge against Anton Schill, her former lover, who wronged her terribly when they were both in their youth. Shocking, moving, and bitterly funny by turns, this story has been musicalized skillfully, for the most part, in songs that run the gamut from the darkly comic “I Walk Away” to the gorgeous love ballad “You, You, You” to the creepy “I Will Never Leave You” to the hauntingly wistful “Love and Love Alone.” One of the most astonishing facets of the show is the production number “Yellow Shoes,” in which the townspeople rejoice over material goods purchased with credit they have been granted in anticipation of the windfall they expect in return for murdering Schill. Following runs in Chicago and at the Signature Theatre in the Washington, D.C. metro area, a shortened version of The Visit was presented as part of the Williamstown Theater Festival in 2014 and then came to New York the following year in a production poorly directed by John Doyle. The Broadway run amounted to only 61 performances, but that tally should not dissuade one from experiencing the cast album, which showcases the stellar performance of beloved Broadway veteran Chita Rivera as Claire. Captivating as always, Rivera is partnered by the Anton of Roger Rees, who recorded this album while suffering from the brain cancer that forced him to bow out of The Visit during its short Broadway run. (In retrospect, his passing in July 2015, as well as the deaths of Fred Ebb in 2004 and Terrence McNally in 2020, amplify and deepen the elegiac feel of the recording.) Among the other standouts in the cast  are Jason Danieley as the schoolmaster who represents the conscience of the town in “The Only One”; Tom Nelis, Matthew Deming, and Chris Newcomer as Claire’s “entourage,” two of them eunuchs who sing in falsetto; and, in the role of Young Anton, John Riddle, whose beautiful tenor is a pleasure to hear in “You, You, You.” With a score that also contains a few songs less effective than those mentioned above, The Visit is not so finely honed a musical as the very best of the best, such as Kander & Ebb’s Cabaret and Chicago, but it’s a worthy addition to the canon. — Michael Portantiere