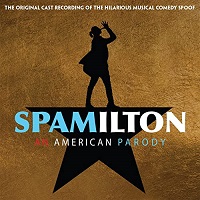 (5 / 5) Of course, you knew Gerard Alessandrini wasn’t going to leave Hamilton alone, but who would have predicted this? It’s a whole evening of Revolutionary spoofery, punctuated by multiple Forbidden Broadway-like riffs on other shows and stars of the day. And it works spectacularly well. Alessandrini’s engaging liner notes reveal his insecurity about learning to write rap and hip-hop, yet he appears to have mastered those forms thoroughly, betraying a show-tune sensibility only through his preciser-than-Lin-Manuel rhyming: “I’m getting nervouser, Sir/ Be terser in your verse, Sir/ You’re no Johnny Mercer.” After the briefest of full-orchestra intros, the music’s in the hands of Forbidden Broadway vet Fred Barton at the piano, and he supports one of the best casts Alessandrini was ever blessed with. How they manage to clearly utter every rapidly passing syllable, and land every joke, is a miracle. As Hamilton, Dan Rosales is Lin-Manuel Miranda with more voice. Chris Anthony Giles and Nicholas Edwards serve up wicked parodies of Leslie Odom, Jr. and Daveed Diggs. Glenn Bassett is King George in “Straight is Back,” Juwan Crawley plays all of the other guys, and in the women’s roles, Nora Schell is simply amazing; she transitions expertly and rapidly between Renée Elise Goldsberry and Philippa Soo with laser accuracy, also serving up delicious Bernadette and Audra cameos. (Her Barbra isn’t quite there yet.) Even Christine Pedi’s beloved Liza turns up for a funny “Down With Rap” turn. With virtually the entire Hamilton score lampooned, plus side trips into astute 2017 Broadway commentary and some outrageous musical-hybrid moments (An American Psycho in Paris, The Lion King and I), this album’s a nonstop party. — Marc Miller