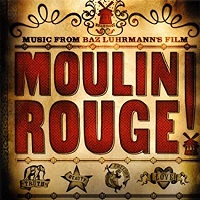 (1 / 5) Here is the soundtrack recording (partly; see below) of what might be described as a movie musical that’s perfect for the ADD generation in terms of its plot (based on well-worn tropes from several famous works, most notably the operas La Bohème and La Traviata and their literary source material) as well as its “jukebox” score (an overstuffed basket of pop hits from the last half of the 20th century). Also geared toward those who suffer from attention deficit disorder is the ridiculously frenetic editing of the film as directed by Baz Luhrmann. Presumably, at least some people who enjoyed the musical performances in Moulin Rouge! might wish to own the soundtrack album if only to experience the songs without having to endure the over-editing of the film itself. But caveat emptor, as the album titled Moulin Rouge! Music from Baz Luhrmann’s Film does not, for the most part, feature performances from the movie, instead offering covers of those covers. To cite only one major example, this collection starts with “Nature Boy” sung not by John Leguizamo (who plays Toulouse-Lautrec in the film and sings the song to open it) but instead by David Bowie. A highlight of the album is a performance that is, indeed, heard in the movie: Ewan McGregor’s lovely, romantic rendition of Elton John and Bernie Taupin’s beautiful “Your Song.” But fans of the film who want audio-only versions of the performances in it will need to additionally seek out the album Moulin Rouge! 2, which includes such items as Nicole Kidman’s “Sparkling Diamonds” (a silly mash-up of “Diamonds Are a Girl’s Best Friend” and “Material Girl”); Jim Broadbent, Richard Roxburgh, et al. having their way with “Like a Virgin” (yes, another Madonna song); and the Can-Can pastiche “The Pitch (Spectacular Spectacular).” There are also excerpts from the film’s background score by Craig Armstrong, for anyone who might care a whit about that. – Michael Portantiere 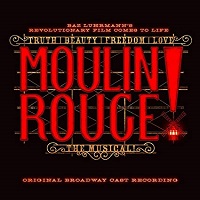 (1 / 5) People who loved Baz Luhrmann’s Moulin Rouge! on the screen won’t necessarily have similar affection for the Broadway musical based on the movie. There are many differences, including much of the score (songs first made famous by Lady Gaga, Britney Spears, the Eurtyhmics, etc. are now included as others have been jettisoned) and some of the story elements and dialogue. Those who enjoyed the seemingly fueled-by-crack editing of the movie will, of course, miss that element in the stage adaptation, while others who abhorred and deplored all that relentless, insanely quick cutting will appreciate being able to make their own decisions about what to focus on when seeing the show, and for how long. As for the cast recording, at least you’ll know exactly what to expect when/if you get your hands on it: a truckload of pop hits, or fragments of same, performed by Karen Olivo as Satine, Aaron Tveit as Christian, Danny Burstein as Harold Zidler, Robyn Hurder as Nini, Tam Mutu as The Duke of Monroth, Sahr Ngaujah as Toulouse-Lautrec, and the other original cast members who sang them on stage at the Al Hirschfeld Theatre before and, in some cases, after the show was forced to suspend performances due to the COVID-19 crisis of 2020. (Cast album listeners have the additional assurance that they will, indeed, hear Satine’s songs delivered by Olivo, who was frequently absent during the eight months or so that Moulin Rouge! ran prior to its closure at the onset of the pandemic.) Although Tveit tends to come across as bland on stage, his strong, clear, unaffected tenor voice is a pleasure to hear on this album, and Burstein is always a vivid presence. The musical supervisor here is Justin Levine, with Cian McCarthy as conductor and Matt Stine as Music Producer — that last credit an unusual one for a Broadway show, or at least it used to be. – M.P.