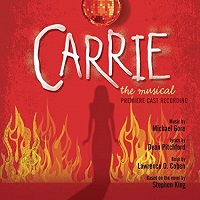 (2 / 5) Based on the supernatural horror novel by Stephen King, which had previously been adapted as a highly successful film in 1976, Carrie is/was one of the most infamous, ignominious flops in musical theater history. After a disastrous tryout run in Stratford-Upon Avon, the show managed only 16 previews and five performances on Broadway in the spring of 1988, yielding no cast album. Many critics and others felt that the work of composer Michael Gore, lyricist Dean Pitchford, and book writer Lawrence D. Cohen was wildly inconsistent in quality, with several riveting moments of confrontation between the bullied, telekinetic teenager Carrie White and her religious zealot mother Margaret playing out powerfully in the midst of risible scenes and songs concerning Carrie’s experiences in high school. Apparently, much of the problem with the production rested in the fact that the American creative team and director Terry Hands of the Royal Shakespeare Company were not on the same page as to what the look, tone, and presentation style of the show should be. But, as noted, there were also huge problems in the writing, leading to major changes for the revisal that was presented Off-Broadway in 2012. The songs “Dream On,” “It Hurts to Be Strong,” “Don’t Waste the Moon,” “Heaven,” “I’m Not Alone,” “Wotta Night,” and the camp classic “Out for Blood” were all dropped, while several new ones were added; two of the best of them are the ballad “Dreamer in Disguise,” sweetly sung by Derek Klena in the role of Tommy Ross, and “Stay Here Instead,” in which Margaret pathetically pleads with her daughter not to go to the prom. (If only she had listened!) But there are still a few mediocre or worse numbers among both the old and new songs, for example, “In” and “A Night We’ll Never Forget.” As was the case with the original version, the score’s musical/dramatic highlights are the unnerving Carrie/Margaret duets “And Eve Was Weak” and “I Remember How Those Boys Could Dance,” and Margaret’s moving solo “When There’s No One.” On the cast album of the 2012 production, these and other songs benefit greatly from the deeply committed performances of Molly Ranson as the tormented Carrie and one of the all-time Broadway greats, Marin Mazzie, as her sadly deranged mother.  Rounding out the strong cast are Christy Altomare as Sue, Jeanna de Waal as Chris, Ben Thompson as Billy, Wayne Alan Wilcox as Mr. Stephens, and Carmen Cusack in a wonderfully warm turn as Miss Gardner.  — Michael Portantiere