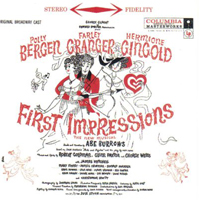 (1 / 5) There may be a beguiling musical to be coaxed out of Pride and Prejudice, but Abe Burrows’ attempt isn’t it. Like several shows of the era, this one spends most of its time wishing it were My Fair Lady. Indeed, Elizabeth Bennett’s exuberant “This Really Isn’t Me” is so close to “I Could Have Danced All Night” that Lerner and Loewe probably could have sued. Other songs are ungainly stabs at hyper-literacy on the part of the writers (music by Glenn Paxton, lyrics by Robert Goldman and George David Weiss): “I Suddenly Find It Agreeable,” “A Gentleman Never Falls Wildly in Love,” and “Wasn’t It a Simply Lovely Wedding?” There are casting problems everywhere: Farley Granger’s Darcy is off-key and listless, and what does Hermione Gingold’s music hall presence have to do with Jane Austen? As Elizabeth, Polly Bergen is game but miscast; at one bizarre point, in “Fragrant Flower,” she actually has to trill in contralto. The album comes to life a bit when Phyllis Newman lilts through “I Feel Sorry for the Girl,” and again when Ellen Hanley soars through that wedding number. But the overall effect is of spending a long afternoon at an English aunt’s home and choking on the crumpets.  — Marc Miller