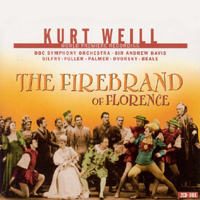 (2 / 5) Capriccio and the BBC left no manuscript unturned in reconstructing Kurt Weill’s biggest Broadway flop, a 1945 operetta about Benvenuto Cellini, with lyrics by Ira Gershwin. The accompanying booklet describes in detail the quest for the right tempi, the full orchestrations (mostly by Weill, assisted by Ted Royal), and the missing songs. It’s all scrupulously assembled, excellently conducted by Sir Andrew Davis, and judiciously produced. In place of Edwin Justus Mayer’s verbose book, we have Sam Brookes’ witty rhyming couplets to connect the songs, and they are read with aplomb by Simon Russell Beale. The Weill-Gershwin score has its undeniable delights (“You’re Far Too Near Me,” “Sing Me Not a Ballad,” “The Nosy Cook”), but the show is hampered by needless plot detours and extraneous ensembles. The tone is now lighthearted, now heavy-handed, as if the creators couldn’t decide if we’re to care about these characters or not. Rodney Gilfry, for all of his vocal resources, can’t turn the bellicose braggart Cellini into a charmer; nor can Lori Ann Fuller overcome a mixed bag of songs, and George Dvorsky is at sea as the bumbling Duke. — Marc Miller