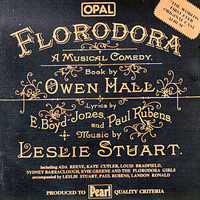 (2 / 5) The blurb on the CD cover calls this “the world’s first-ever original cast album!” Well, the cast of the 1899 success did enter the Gramophone Company recording studios in 1900 and did commit several songs to wax, including the famous sextet “Tell Me, Pretty Maiden.” But the tracks found on this compilation album range in sound quality from barely audible to unlistenable; indeed, several sound like messages from extraterrestrials. Nearly all are performed to tinny piano accompaniment. Few of the lyrics by Paul Rubens and Frank Clement can be deciphered, and those that can aren’t any great shakes. Still, allowing for the otherworldly quality of the audio, one can tell that Leslie Stuart’s melodies have a nice lilt, and this is a valuable document of the performance styles and stars of the day — stars such as Ada Reeve and Kate Cutler. There’s a goofy track of Louis Bradfield dueting with himself in “Tell Me, Pretty Maiden,” affecting a falsetto for the women’s parts. The album is filled out with solo piano recordings of music from the show, and a track from a 1915 revival that sounds more modern. As an archaeological dig, the CD is a noble attempt and occasionally pleasant listening. — Marc Miller 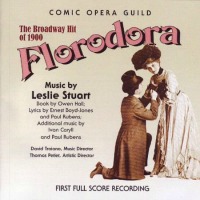 (3 / 5) The indefatigable Comic Opera Guild had a go at Florodora in 2013, and its recording has one enormous advantage over the “original cast” cylinder tracks: You can hear it. The score is presented more or less complete, and it must be said that Leslie Stuart wrote some good imitation Victor Herbert. The choral work is downright ragged at times, and among the principals, only Natalie Emptage achieves anything like a characterization. But if you want to hear what an utterly typical comic-operetta score sounded like back in the day, or what passed for lyrical wit in 1900, you could do a lot worse. (A double-CD set of this performance,  including all the dialogue, is also available, but I’ll pass.) — M.M.