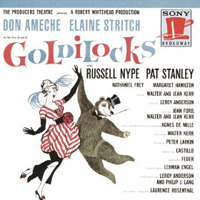 (3 / 5) Here, Elaine Stritch plays a pre-World War I stage star entangled with a fly-by-night silent movie director (Don Ameche) who yearns to make an epic about ancient Egypt. The hilarious book by Walter and Jean Kerr was dismissed by the critics, for some reason. But the urbanely amusing score — music by composer Leroy Anderson, lyrics by the Kerrs and Joan Ford — provides a droll showcase for Stritch. She’s a ball of fire in “Give the Little Lady” and rollicking in the comic lament “Who’s Been Sitting in My Chair?” (“Who’s been sleeping in my bed? / Just me, just moi / I’d like a two-fisted biped / For my boudoir.”) Stritch is a riot when criticizing a too-reasonable lover (“The Beast in You”), and ruefully touching in the confessional “I Never Know When to Say When.” Ameche is suitably sardonic as her love/hate object, and Nathaniel Frey and Margaret Hamilton as Ameche’s moviemaking cronies score in a pair of clever comedy numbers, “Bad Companions” and “Two Years in the Making.” Anderson’s music neatly blends period music styles into a standard 1950s Broadway sound — he himself wrote the orchestrations in collaboration with Philip J. Lang — and the lyrics are dryly witty throughout. Romantics looking for soulful ballads needn’t bother; for everyone else, this album is good, sophisticated fun, with Stritch at her peak. — David Barbour