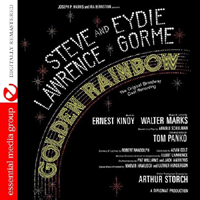 (3 / 5) The ultimate in “guilty pleasure” musicals, Golden Rainbow took Arnold Schulman’s charming little play A Hole in the Head and pumped it up into a glitzy, glamorous musical set in — where else? — Las Vegas. Walter Marks’ score yielded a smash hit for Steve Lawrence, “I’ve Got to Be Me.” Lawrence co-starred in the show with his wife, Eydie Gorme. Although her acting ability was decidedly limited, Gorme could really belt out a ballad, and Marks gave her a good one: “He Needs Me Now.” Like Vegas itself, Golden Rainbow glitters but doesn’t have a lot of depth; just read the song titles and you can pretty much tell what they’re all about. Still, it’s an upbeat score that’s perfect for listening and singing along. As heard on the original LP release, the album is high in energy, moving along with rapid momentum. Some of that is due to the orchestrations of Jack Andrews and Pat Williams, and the conducting of the esteemed Elliot Lawrence — but it’s also because the finished master tape wouldn’t fit the time limitations of a vinyl LP, so they just sped up the tape! When Steve and Eydie themselves released the CD in the early 2000s, they kept the pace exactly as it was: breathless. Fortunately, a later remastering of the recording, available on demand as a CD-R, corrected the speed problem. — Ken Bloom