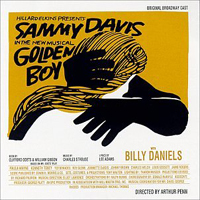 (4 / 5) This is a tale of two LPs and three CDs. With music by Charles Strouse and lyrics by Lee Adams, Golden Boy has a book based on the Clifford Odets drama of 1937, adapted for the musical by Odets and William Gibson. The cast album was initially released by Capitol on LP shortly after the Broadway opening, which followed an extended preview period beset by changes to the show and missed performances by Sammy Davis in the title role of boxer Joe Wellington. For the recording sessions, Davis’ voice was tired and strained at times, yet his singing is dynamic and exciting: “Night Song” becomes a cry of pain from the gut; “Stick Around” is devil-may-care yet thrilling; “Colorful” is pungent, funny, and decidedly angry beneath the surface; and “I Want to Be With You,” sung with Paula Wayne as Lorna Moon, is heartfelt and moving. When Davis was in better voice a few months later, he re-recorded his solos and his duet with Wayne for a new LP that replaced the first one. The differences are many. For example, the finale of the first LP was a reprise of “Gimme Some” that was not in the opening-night stage version. In it, Joe’s brother (Louis Gossett) gives the news of Joe’s death to his father and Lorna, then Gossett sings a few lines from “Gimme Some,” joined by Joe from the great beyond. (This may sound cheesy, but it was an effective ending to the album.) The final track on the second LP is the show’s climactic fight, which may have been exciting in the theater but barely registers musically. Also, Davis’ new recording of “Night Song” is smoothly sung, with interpolated notes, but dull in comparison with his brilliant first effort. Other songs that are more effective on the first LP include “Stick Around,” “Can’t You See It”, and “I Want to Be With You.” Unfortunately, all three CD versions contain the re-recordings. Golden Boy is fascinating in that Strouse wrote it in a more mature, jazzy style than his earlier works (Bye Bye Birdie, All American), and  Adams’ lyrics are colloquial, pungent, and witty. In “Don’t Forget 127th Street,” Davis, Johnny Brown as his brother-in-law, and their friends boisterously rag on their Harlem neighborhood with smart-ass humor. Another powerful track is the gorgeously sung, gospel-style protest song “No More.” “Everything’s Great” is well sung by Wayne’s Lorna and her loser boyfriend (Kenneth Tobey). Billy Daniels is deliciously evil as Eddie Satin (Joe’s manager), using his famous jazz chops to excellent effect in “This Is the Life” and “While the City Sleeps.” In sum: The CDs and the second LP of the Golden Boy cast album score technical knockouts, but the true champ is the first LP version. — Jeffrey Dunn