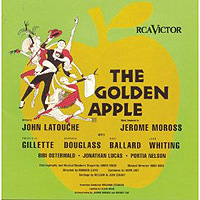 (3 / 5) One of the greatest of all cult musicals, this Jerome Moross-John Latouche collaboration has never really commanded the attention it deserves, and the original cast album may be one reason why. A reworking of Homer’s Odyssey and Iliad, set in Washington State just after the Spanish-American War, The Golden Apple bristles with smart ideas, thoughtful lyrics, tart commentary, distinctive melody, and a dream cast. But the show is sung-through, and anything less than a complete rendering was bound to sell it short. In 1954, that would have taken at least two LPs. While RCA’s single-disc album packed in as much music as the technology then allowed, it’s still a sampler at best. To tie the plot threads together, the decision was made to have cast member Jack Whiting recite a rhymed-couplet synopsis; he’s personable, but the whimsical concept feels forced. The monaural recording sounds hurried, with fast tempi and echoes being abruptly cut off to make room for the next track. Of the two finales Moross wrote, the label went with the reprise of the hoped-for hit ballad “It’s the Going Home Together” rather than the more challenging, less conventional ending. With all of these caveats, there’s still much to enjoy here, especially from the ladies: Kaye Ballard’s “Lazy Afternoon,” Priscilla Gillette’s “Windflowers,” Bibi Osterwald’s “Goona-Goona,” Portia Nelson’s “Doomed, Doomed, Doomed.” (As Ulysses’ introspection intensifies, the material does court pretentiousness.) But The Golden Apple is a far greater work than this album conveys. What the show really needed was a definitive, full length recording in stereo, but it didn’t get one until 60 years after the fact. (See review below.)  — Marc Miller 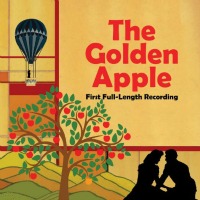 (4 / 5) At last. The New York City Center Encores! series didn’t get around to The Golden Apple until May 2017, but the Lyric Stage of Irving, Texas beat them by two and a half years. This live recording of that production, culled from four performances in the fall of 2014, fully captures the work’s brilliance and one-of-a-kindness. It’s close to note-complete, beautifully engineered, and splendidly conducted by Jay Dias. It includes the superior original finale, which the Broadway show and cast album producers scuttled in favor of a more audience-friendly reprise of “It’s the Going Home Together.” And the cast of unknowns is mostly terrific. Christopher J. Deaton’s performance as Ulysses is as well acted as it is sung, and Kristen Lassiter as Penelope does wonderfully by “Wind Flowers.” Danielle Estes’ Helen isn’t as earthy as Kaye Ballard’s, but she’s fine and flirty.  James Williams has the right attitude for Hector, if not much voice and a tendency to overindulge in Sprechstimme. The orchestrations by Moross and Hershy Kay never sounded so glorious, and the live recording is clear down to the last lyric, though the placid audience seems to be missing a lot of the jokes. Latouche’s genius required so full a recording to be truly appreciated, as did Moross’s unique musical vocabulary (he really liked flatted sevenths). The complete libretto is included in the CD package, as are several appreciative essays. If this isn’t a perfect Golden Apple cast album, it’s very good, and the best we’re likely to get. — M.M.