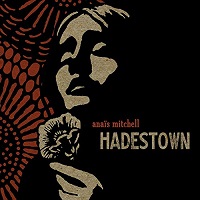 (3 / 5) Though indie singer/songwriter Anaïs Mitchell always meant for Hadestown to be a stage musical, its first incarnation was in the form of this concept album, recorded for posterity and to give the piece greater audience outreach. The response was overwhelmingly strong, and Hadestown grew a dedicated fan base over the years until a production opened at the New York Theatre Workshop in 2016, followed by the show’s Broadway premiere in 2019. Considering the immediately intense response from fans, it’s surprising now to hear how simplistic the concept album is; compared to other concept albums that became stage musicals (Evita, for example),  this one is a much more relaxed affair. Based on the Greek myth of Orpheus, who travels to the Underworld (“Hadestown”) to bring back his love Eurydice, the piece as heard on this recording is a fairly straightforward retelling of the myth and is mostly a platform for Mitchell’s talents as a songwriter. Her music can groove festively (“Way Down in Hadestown,” “When the Chips Are Down”) or float dreamlike (“Wedding Song,” “Wait For Me”), always with an edgy undercurrent that foreshadows the danger lying ahead. Mitchell’s lyrics are poetically expressive, though they become sharper and more story-driven on the later cast albums. Here, Mitchell herself sings the role of Eurydice while Justin Vernon performs Orpheus. An odd choice is made in the mixing of Vernon’s vocals so that it sounds like multiple Vernons are singing together each time Orpheus is present. (According to the myth, Orpheus possessed a mystically beautiful singing voice, and the mixing may have been meant to reflect that, but the effect is off-putting.) Those who were unfamiliar with Hadestown until it came to Broadway and who desire to hear its origins will find this album mostly engaging, but both subsequent recordings of the score are superior and, of course, more indicative of what the piece eventually became. — Matt Koplik 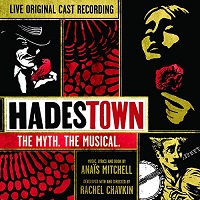 (4 / 5) Recorded live at the New York Theatre Workshop, this album has high-energy performances and a number of welcome changes to the piece since its original incarnation. The biggest change is that the Hadestown heard here is no longer so straightforward a re-telling of the Orpheus and Eurydice myth, but builds upon it by expanding characters that didn’t have much presence on the original recording and giving them more active roles. These include the messenger god Hermes (Chris Sullivan), who now narrates the proceedings. A trio of actresses called The Fates are more fully present as a Greek Chorus, and the myth of Hades (a quietly domineering Patrick Page) and his wife, Persephone (Amber Grey), is explored with greater depth here, showing us how their marriage, once passionate but now cold, has detrimentally effected the characters on earth. These changes make Hadestown a more fulfilling and well rounded piece, but they also create a new problem: Mitchell has written the supporting characters with a hard edge and a playful attitude, whereas her songs for Orpheus and Eurydice have a more earnest romanticism. On a surface level, this makes sense, as the young pair are meant to provide the heart of the piece. But in giving the supporting characters such rich, lively material, Mitchell has made them more interesting than the two leads. It doesn’t help that several of Orpheus and Eurydice’s songs included in the NYTW production are inexplicably not on the album. (“Wedding Song” is a major loss). Considering all of this, Damon Daunno and Nabiyah Be do admirable work as the doomed lovers. In fact, Daunno, is perhaps the best Orpheus heard on any of the official Hadestown recordings; he gives the character a confident, passionate swagger, and his voice sails smoothly through Mitchell’s score, seamlessly gliding in and out of a pure falsetto. Generally speaking, what’s presented on this recording is so well done that it almost makes up for the material that isn’t included. Fan favorites from the concept album, such as Orpheus’ “Wait for Me” or Hades’ scarily relevant “Why We Build the Wall,” are still here, but Mitchell’s additions are also worth noting: Persephone is given the jaunty “Livin it Up On Top,” gracefully vamped by Grey, and Hermes begins the show with a new opening number, “Road to Hell.” From the moment a trombone wails a jazzy, New Orleans-fueled intro to that song (orchestraters Michael Chorney and Todd Sickafoose continue from the concept album), you know that the energy of Hadestown has shifted from relaxed mysticism to hot theatricality. It’s a welcome change. — M.K. 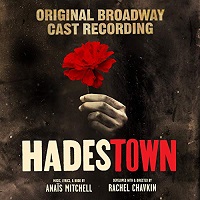 (5 / 5) After the workshop production at NYTW, Hadestown was staged in Canada and at the Royal National Theatre in London, where it continued to develop until it finally came to Broadway nearly a decade after the release of the concept album. On stage, the result is often breathtaking, with Mitchell’s score embracing its theatrical potential and director Rachel Chavkin and her team of designers working visual wonders. Some have complained that, in turning Hadestown into a full evening of theater, Mitchell overstuffed the piece with unnecessary material. There’s some truth there, in that, when the show is experienced live on stage, some numbers feel less important than others and/or seem to reiterate points made previously. But when listening to the recording, all of those complaints melt away, and we’re left with Mitchell’s fantastic work sung by a phenomenal company. Grey and Page are back as Persephone and Hades, with André de Shields offering a wiser and kinder Hermes than his predecessors. Eva Noblezada is a passionately sung Eurydice; her performance, and the addition of “Any Way the Wind Blows” (an already established song of Mitchell’s), give the character some much needed grit. Reeve Carney’s interpretation of Orpheus aims more towards a wandering man-child than the swaggering heartthrob offered by Daunno. This is fine, although it robs the character’s romantic pairing with Eurydice of heat. Also, while Carney has a strong voice and does well by the material, his singing is not quite as smooth and effortless as Daunno’s. Still, these are small quibbles about what’s overall a terrific album. One of its major highlights is “Wait for Me,” Orpheus’ cry to Eurydice as he travels to the Underworld to save her.  While the song was moving and pretty on the concept album, Mitchell, Chorney and Sickafoose here have shaped it into something spectacularly theatrical. And, speaking of waiting: Fans of Hadestown had to wait almost 10 years for the piece to become a completely satisfying stage musical, but their patience has been well rewarded. — M.K.