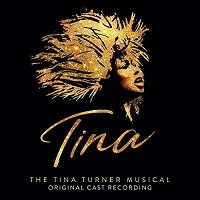 (3 / 5) When experienced live in the theater, a “bio-musical” — like any other show — may be judged on several levels, including the production values and the quality of the storytelling, over and above the performances. But a cast album is all about the music. In that regard, this recording of Tina: The Tina Turner Musical, shorn of the show’s execrable book and direction, succeeds  thanks to the searing, passionate singing of Adrienne Warren in the title role. Also a pleasure to hear are the arrangements (by Nicholas Skilbeck) and orchestrations (by Ethan Popp), which deftly approximate the original charts of the songs that brought Turner worldwide fame during her decades-long career as a rock music goddess.  Warren was an Olivier Award nominee for this role on the London stage, and her portrayal was considered so vital to the show’s success that she was signed to repeat it on Broadway. Pick any tracks from the album at random — for example, “River Deep – Mountain High,” “Proud Mary,” “Private Dancer,” or “What’s Love Got to Do With It?” — and you may find yourself marveling at how skillfully Warren pays tribute to the icon’s one-of-a-kind voice and delivery while still making her performance sound organic, something deeper than sheer mimicry. The other singers heard here are fine, including Kobna Holdbrook-Smith as Ike Turner. Still, the recording is All About Warren, and she will not disappoint those who feel they want an audio memento of this show even though, of course, Turner’s actual recordings of these songs are still and no doubt always will be very much available — Michael Portantiere