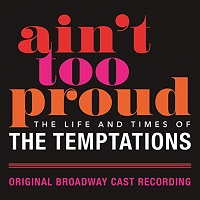 (5 / 5) There’s always a sense of déjà vu when a jukebox musical opens on Broadway,  as most people walk in humming the tunes. If Ain’t Too Proud: The Life and Times of the Temptations doubles that feeling, it might be due to another “ain’t” from distant memory: Ain’t Misbehavin’, the first jukebox revue to take home the Tony Award for Best Musical. Ain’t Too Proud offers audiences just what that 1978 show did, with great songs delivered in great performances. Praised for its spirited direction (Des McAnuff), clever book (Dominique Morisseau), and high-voltage choreography by Sergio Trujillo, who took home a Tony for his work, Ain’t Too Proud also delivers the goods in its cast recording. The energy of what’s being performed eight times a week at the Imperial Theatre is all here in an album made up of more than two dozen Temptations songs, featuring the one-of-a-kind Detroit rock & roll rhythms and harmonies for which the group became famous. Highlights include such favorites as “My Girl,” “Just My Imagination,” “Get Ready,” and “Papa Was a Rolling Stone.” As the show’s storytelling reveals, there were more than a few “Temps” over the course of the group’s long career besides its original foursome. But Derrick Baskin, James Harkness, Jawan M. Jackson, Jeremy Pope, and Ephraim Sykes stand front and center, leading a tremendously talented cast. The recording also offers a good deal of interstitial narrative, directly from the show’s book, that aids in the appreciation of the story.  (Of course, if you so choose, you can eliminate those tracks and custom design the album for your own listening pleasure). Mention should also be made of the fine orchestrations by Harold Wheeler, who at age 75 had his legendary, 50-year Broadway career capped with a special 2019 Tony Award for his contribution to the American musical. — Ron Fassler