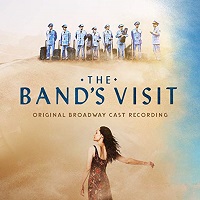 (5 / 5) Stranded in an Israeli desert town by mistake, an Egyptian band stays overnight with the locals before heading on to their engagement. Composer-lyricist David Yazbek has created a luminous score that highlights not the differences between these strangers, but their commonality, mankind’s shared needs for love and connection. The music incorporates klezmer influences and American jazz, but especially Arabic folk and classical idioms and instruments: the oud, riq, and darbouka. Katrina Lenk’s nuanced voice brings life to the role of cafe owner Dina; she and her friends offer the Egyptians a heaping dish of sarcasm and watermelon in “Welcome to Nowhere.” (Their sleepy village has more “blah, blah, blah” than that Gershwin song.) “It Is What It Is” hints at Dina’s history, but the haunting “Omar Sharif” reveals more, describing how young Dina and her mother adored Sharif movies and the exotic singing of Oum Kaltoum. This admission resonates with Tewfiq, the Egyptian band’s buttoned-up conductor (Tony Shaloub). His single solo is an a cappella number in Arabic, “Itgara’a,” hinting at inner sorrows. Yazbek deftly slides the concluding phrase of “Itgara’a” into Dina’s response, “Something Different.” The other Egyptians also forge bonds with the Israelis, often through music. “The Beat of Your Heart” is an exuberant memory song, evoking how former musician Avrum (Andrew Polk) met his late wife; Camal (George Abud) and Simon (Alok Tewari) joyfully add their violin and clarinet. The awkward Papi (Etai Benson) relates his trouble with girls in the hilarious “Papi Hears the Ocean,” so Haled (Ari’el Stachel) advises him in the style of his idol, Chet Baker (“Haled’s Song About Love””). Camal accompanies Itzik (John Cariani) as he soothes his child in “Itzik’s Lullaby.” The transcendent “Answer Me” concludes the vocals, sung by the “Telephone Guy” (Adam Kantor), who’s forever waiting by the village’s single pay phone in the hope that his girlfriend will call. For a few glorious seconds, the entire company joins in, reflecting the basic human need for connection. Like the Telephone Guy, our ears are “thirsty” for more of that. – Laura Frankos