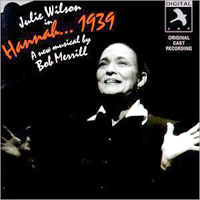 Original Off-Broadway Cast, 1992 (JAY) No stars; not recommended. Produced by the Vineyard Theatre, this show was much more serious — and much weaker — than composer-lyricist Bob Merrill’s earlier work, notably, New Girl in Town, Take Me Along, Carnival, Funny Girl (for which he provided lyrics only to Jule Styne’s music), and a few other quickly closed flops. In Hannah, Julie Wilson plays a famous Jewish clothing designer whose dress business is commandeered by the Nazis for the purpose of making uniforms. Perhaps because of the seriousness of the characters and the milieu, the energy that marked Merrill’s previous shows is not in evidence here. Linked to the drably plotted book, which includes a number of unenlightening flashbacks, the score sounds like one long, dreary song. — David Wolf