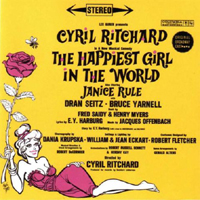 (5 / 5) “Ev’ry man, I must alert you / When seeking a lady fair / Always gravitates to virtue / Still hoping it won’t be there.” These four lines, echoing W.S. Gilbert, are only a meager sampling of the wit that E.Y. Harburg brought to this musical adaptation of Aristophanes’ Lysistrata, in which the title character persuades the ladies of Greece to withhold sexual favors until their bellicose spouses stop pursuing war. When they do, hell breaks loose — and so does heaven. Perhaps all good lyricists are philosophers; if so, Harburg, forever contemplating man’s inhumanity to man, was one of the most philosophical, but he never forgot to keep ’em laughing while sending the message. Known for trying his collaborators’ patience, Harburg must have found this one of his smoothest assignments in that he was working with the lilting music of the long-deceased Jacques Offenbach, who couldn’t talk back. Harburg’s words sit on Offenbach’s melting tunes as a gondola glides on a cosmic sea in the masterful lyricist’s “Adrift on a Star,” a setting of the beloved barcarole from The Tales of Hoffman. Hearing this virtually flawless, operetta-like score, you might wonder why The Happiest Girl in the World only played 96 performances. Explanation: The Fred Saidy-Henry Myers book made for a listless, substrata Lysistrata. The show’s high points are on the CD, and that definitely includes Cyril Ritchard — the personisfication of “fey” — performing as both a highborn Greek and the troublemaking Pluto. Janice Rule, not known for musicals, sings well here as the goddess Diana, who’s on the girls’ side. Dran Seitz as the title character, and Bruce Yarnell as General Kinesias, warble beautifully. So does everyone in the large chorus, Lainie Kazan among them. The orchestrations are by the great Robert Russell Bennett, with the equally great Hershy Kay. Conductor Robert DeCormier did the vocal arrangements. In other words, top professional work all around. — David Finkle