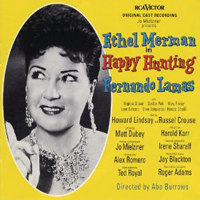 (3 / 5) Ethel Merman’s only flop starred her as Liz Livingston, a wealthy, rough-at-the-edges widow from Philadelphia who decides to beat Grace Kelly at her own game and marry off her daughter to royalty — in this case, Spanish royalty (Fernando Lamas). The flimsy book by Howard Lindsay and Russel Crouse, who apparently hoped to repeat the topical success of Call Me Madam, wasn’t loved by critics. However, the score — written by a pair of Broadway neophytes, composer Harold Karr and lyricist Matt Dubey in a style that can only be called “School of Irving Berlin” — does contain a number of tasty items. Merman’s voice turns everything to gold, especially her jubilant intro number, “Gee, But It’s Good to Be Here,” in which she holds one note for an impossible length of time and then goes up a step without taking a breath. Also fun are the risqué “Mr. Livingstone,” in which Liz recalls her marriage, and the balled “This Is What I Call Love.” Lamas scores with the lushly romantic “It’s Like a Beautiful Woman.” The numbers for the inevitable young lovers (Virginia Gibson and Gordon Polk) are disposable, and the topical lyrics, as in “The Wedding of the Year Blues,” are dated and silly. Still, even the weakest of songs benefit from Ted Royal’s orchestrations, with their swingy undertones. — David Barbour