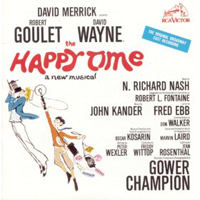 (4 / 5) This is a charming if inconsequential cast album of a show that missed the mark onstage. The score, by John Kander and Fred Ebb (Cabaret, Chicago), lives up to their reputation as the kings of great opening numbers. In this case, it’s the title song, so magnificently sung by Robert Goulet that you’ll think you’re about to hear one of Broadway’s all-time great musicals. Melodic, evocative, and dramatic, the song is a joyous ode to the wonders of childhood and memories of hometown life. However, the show that follows it was not embraced by the public, which had its mind on less innocent events in 1968. Whether or not the timing of this sweet, simple musical is responsible for its obscurity remains a mystery. What’s left behind is a lovely recording of a beautiful score that includes little-known but inspired ballads such as “I Don’t Remember You” and “Walking Among My Yesterdays,” plus showstoppers like “The Life of the Party” and “A Certain Girl.” Goulet’s Tony Award-winning performance shows why he was a great singing star of the 1960s; David Wayne is also excellent as the curmudgeonly Grandpapa. Although The Happy Time is not regarded as a precious gem from the golden era of musical theater, this album is a must for Kander and Ebb fans.  — Gerard Alessandrini