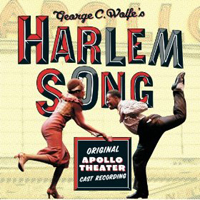 (3 / 5) George C. Wolfe’s love letter to Harlem played the legendary Apollo Theater. It was less a full-fledged musical, or even a revue, than a museum installation. If many of the new tunes written for Harlem Song, by Wolfe and his Bring in ‘Da Noise, Bring in ‘Da Funk collaborators Zane Mark and Daryl Waters, don’t quite live up to their esteemed ancestry, what could possibly compare favorably to Billy Strayhorn’s “Take the ‘A’ Train” — even when it’s sung in Spanish, as here? The show never gets more daring than that, but with songs by a diverse range of artists, including Duke Ellington, Harold Arlen, and Count Basie, it comes across as a mostly exciting, largely seamless retrospective of Harlem’s rich cultural and musical heritage. The band (led by Mark) and the fine cast of 16 performers, particularly the redolent Queen Esther and B. J. Crosby, are more than capable of smoothing over the rough edges and creating a listening experience that’s alternately cool and hot. A few tracks ignite more quickly than others —  for example, “Well Alright Then,” by Jimmie Lunceford, performed by Queen Esther; “For Sale,” by Clarence Williams and Henry Troy, knocked out of the park by Crosby; and “Linda Brown,” by Alvin Cowens, sung by the whole company. But the heat generated by this recording never dies down for too long. — Matthew Murray