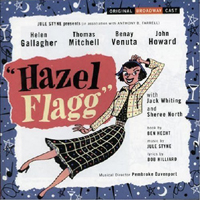 (1 / 5) A credible case could be made that, on any given project, Jule Styne was only as good as his lyricist. Give him Sondheim and you get Gypsy; give him Bob Hilliard and the result is Hazel Flagg. This musical adaptation of Nothing Sacred, Ben Hecht’s classic 1937 film satire, was intended as Helen Gallagher’s stepping-stone to stardom in the title role of a Vermont lass who’s thought to be dying of radium poisoning and is transported to New York by Everywhere magazine for a supposed last fling. (Guess what happens to her prognosis.) Gallagher works very hard here, and her contralto belt is strong and secure. She’s supported by such Broadway reliables as Benay Venuta, Jack Whiting (introducing “Every Street’s a Boulevard in Old New York”), and Thomas Mitchell (who doesn’t sing a note but took home a Best Musical Actor Tony anyway). Unfortunately, the star’s luck ends there. Asked to carry most of the songs and dances, Gallagher opens with a dull ballad (“The World Is Beautiful Today”) and closes with an equally dull 11-o’clocker (“Laura de Maupassant”). Most of what’s in between is dull as well, including romantic interest John Howard, Don Walker’s by-the-book orchestrations, and several ho-hum ensemble numbers, although the show does sport amusingly elaborate vocal arrangements by Hugh Martin. The main problem seems to have been that Hilliard’s lyrics failed to inspire Styne. Well, if you had to set “Autograph Chant” or “Salome (With Her Seven Veils),” you’d be uninspired, too.  — Marc Miller