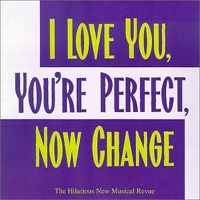 (4 / 5) “Oh my God, that’s me up there!” was an audience whisper heard often during the long run of this musical revue, the winning work of Joe DiPietro (lyrics) and Jimmy Roberts (music). Unapologetically middlebrow and critic-proof, the show is not the wittiest or most profound examination of male-female relationships ever written, but it’s a parade of good revue ideas smartly developed: nerds on a date, macho posturing, the shortage of straight, single men, baby-talking parents, geriatric romance, and more. Roberts relies on pastiche — some Lite-FM rock here, a sweet ballad there — and the music supports rather than overwhelms the lyrics. DiPietro rhymes a bit lazily and sometimes stumbles to weak endings, but the general tenor of the songs is likeable. All of the cast members sing well and slip effortlessly in and out of varied characterizations: Danny Burstein as an alpha male blubbering through a chick flick; Jennifer Simard as a mousy date; Melissa Weil bemoaning a bridesmaid’s plight (“For Tabitha, I wore taffeta / You never should, people laugh at ya”); and Robert Roznowski in the generic but affecting “Shouldn’t I Be Less in Love With You?” Roberts did his own vocal and instrumental arrangements, which are as modest and to-the-point as the show itself.  — Marc Miller