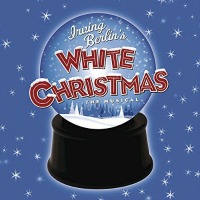 (3 / 5) Librettists David Ives and Paul Blake based this Irving Berlin songfest on the 1954 film of the same title, which starred Bing Crosby and Danny Kaye as ex-G.I.s, now performers, saving their former general’s failing Vermont farmhouse by — what else? — putting on a show. Ives and Blake altered some characters and eliminated four songs (“Heat Wave,” “Gee, I Wish I Were Back in the Army,” that unfortunate minstrel medley, and the campy “Choreography”) while adding eight Berlin classics. These numbers are better integrated into this show than those used in the later Irving Berlin’s Holiday Inn; pairing 1933’s “How Deep Is the Ocean?” with “Love, You Didn’t Do Right By Me” is particularly effective. “Happy Holiday” provides a quick jump from 1944 to 1954, and “Falling Out of Love Can Be Fun,” lifted from 1949’s Miss Liberty, is a kicky piece for the three women. “Love and the Weather” and “I’ve Got My Love to Keep Me Warm” also fit well, and the former gives some character insights. “Let Yourself Go,” however, has a mid-thirties vibe doesn’t sound quite right for a mid-fifties setting. White Christmas debuted at the St. Louis Muny in 2000, followed by a production in 2004 in San Francisco and a Broadway holiday run in 2008. This recording features the San Francisco leads — Brian d’Arcy James and Jeffry Denman as Bob and Phil, with Anastasia Barzee and Meredith Patterson as their girls, sisters Betty and Judy — plus Muny original Karen Morrow as Martha, the general’s aide. It’s a pleasure to hear d’Arcy James’s rich baritone in classics such as the title tune, “Blue Skies,” “Count Your Blessings,” and“How Deep Is the Ocean?” Barzee’s versatility is apparent; she’s wistful in “Love, You Didn’t Do Right By Me,” crackling with Patterson in the Andrews Sisters-styled “Sisters,” and tender in the reprise of “How Deep.” Patterson and Denman have a lot of fun in “Snow” and the tap extravaganza “I Love A Piano.”  (The latter was written in 1915, but it’s timeless.) Morrow instills comic zest into the old Al Jolson hit “Let Me Sing and I’m Happy,” revealing Martha’s desire to perform, yet she manages not to become a caricature. The recording benefits from a sizable orchestra led by Rob Berman, with Larry Blank’s orchestrations intentionally sounding like a fifties movie musical.  A solid choice for Berlin fans or those seeking something for their holiday playlist. — Laura Frankos