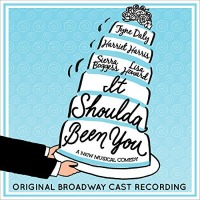 (2 / 5)  Weddings have inspired musicals since at least as early as the 1920s (often with multiple couples overcoming ridiculous obstacles before tying the knot) up through Fiddler on the Roof, Mamma Mia! and The Drowsy Chaperone (which parodied those ’20s shows). The combination of romance, mishaps, family conflict, and celebration is irresistible to writers. It Shoulda Been You joined the list in 2015, having originated as composer Barbara Anselmi’s concept piece at the BMI Lehman Engel Musical Theatre Workshop. Brian Hargrove came on as librettist/lyricist, though five of the workshop lyricists also retained credits; unfortunately, their lyrics vary in quality and are dissimilar in style from Hargrove’s work. Anselmi’s music, while not especially memorable, is sprightly enough, with occasional jazz overtones. Doug Besterman’s orchestrations provide that brassy, old-fashioned musical comedy feel. The cast is comprised of killer comic talent: Tyne Daly as the overbearing Jewish mother, Chip Zien as her husband, Sierra Boggess as the bride, Lisa Howard as the older sister who is in many ways the show’s central character, Harriet Harris as the unhappy mother of the groom, Josh Grisetti as the bride’s ex-boyfriend, and Edward Hibbert as the wedding planner. Plus, any show that has Montego Glover in a throwaway role has star power to spare. There are a few solid character numbers here: the sisters’ relationship is revealed in “Perfect”, Harris as the groom’s mom mourns the loss of her son to marriage in “Where Did I Go Wrong?”, and Howard and Grisetti conjure up childhood memories (“Who Was Angel to My Buffy?”) in “Who?” Daly gets a heartfelt 11 o’clocker in “What They Never Tell You,” and naturally, everyone is reconciled by the finale. So why does the score as heard on the cast recording seem nearly as flat as champagne opened last night? Probably because the show plays like an extended skit from The Carol Burnett Show, moving methodically from situation to situation, punctuated with a running gag about panini stations. “Albert’s Turn,” performed by Hibbert, largely serves to set up a later joke, while “Jenny’s Blues,” sung by Howard, is a textbook declaration of independence, and an ’80s power ballad sung by Glover and Nick Spangler is just pointless. (Spangler replaced David Burtka as the groom during the show’s brief Broadway run.) The comedy all-stars push to nail each joke, but they’re still playing stale stereotypes. Finally, It Shoulda Been You’s nuptial conditions and revelations rival the “ridiculous” factor of those ’20s shows, though in a 21st century social context. Musical comedy fans can accept all kinds of preposterous scenarios, but when practically the entire wedding party is hiding something, that’s harder to swallow than an overstuffed panini. — Laura Frankos