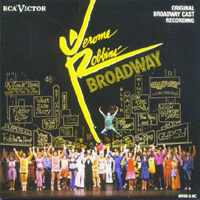 (3 / 5) Lovers of Broadway dance music should snap up this cast album of the 1989 Tony-winning Best Musical, an assemblage of genius choreographer Jerome Robbins’ greatest hits, in which classic numbers from his shows were lovingly recreated by top-notch performers. At the time of the album’s release as a two-CD set, collectors were especially interested in the material that had not previously been recorded with modern sound technology, or at all. Robbins won a Tony for Best Direction for this show, and the cast swept the awards in the musical performance categories; they are well represented by this album. Jason Alexander (Best Actor) does “Comedy Tonight” and duets with Faith Prince on “I Still Get Jealous.” Charlotte D’Amboise (Best Actress) knocks out “I’m Flying” and “America.” Scott Wise (Best Featured Actor) does “Cool.” A sultry, pre-Gravitte Debbie Shapiro (Best Featured Actress) wails the seldom-heard Irving Berlin gem “Mr. Monotony” and leads the surefire “You Gotta Have a Gimmick.” Also found here are longer pieces such as the “Small House of Uncle Thomas” ballet from The King and I and “On a Sunday by the Sea” from High Button Shoes. It all adds up to more than two hours of some of the brightest moments in musical theater history — and the folks at RCA outdid themselves with a lavish, 64-page booklet including more than 40 color photographs, detailed notes, and mini-essays about each show. — Morgan Sills