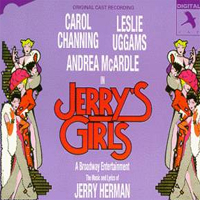 (3 / 5) When Jerry’s Girls opened on Broadway in 1985, it starred Dorothy Loudon, Chita Rivera, and Leslie Uggams. No Broadway cast album was released. But in 1984, when Uggams, Carol Channing, and Andrea McArdle were on a lengthy pre-Broadway tour with the show, the stars made this recording, originally released as two-LPs and later as a single CD. The album includes eight songs from Mame, six each from Hello, Dolly! and Mack & Mabel, four from La Cage aux Folles, two each from Parade, Dear World, and A Day in Hollywood/A Night in the Ukraine, and one from Milk and Honey. (There’s nothing here from The Grand Tour). The over-familiarity of much of the material and the fact that the orchestra is quite small almost make this recording expendable. Almost — for there is “Take It All Off,” a humorous ditty that Herman wrote specifically for Jerry’s Girls. This is also the only place where you’ll find the parody lyrics written for the commercial “Hello, Deli” and the Democrats’ 1964 campaign song, “Hello Lyndon.” Plus, it’s fun to hear McArdle sing songs other than those from Annie, and she’s marvelous in all of them. So is Uggams, even when she crosses the gender line to sing “I Won’t Send Roses.” As for Channing, this was the first show in which the great lady had noticeably passed her prime. By the time she reaches “The Best of Times Is Now,” her voice is somewhat unpleasant. Clearly, we all lose our charms in the end. — Peter Filichia