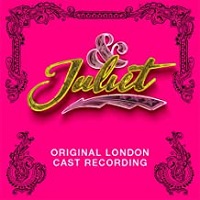 (3 / 5)  & Juliet is, yes, another musical twist on Shakespeare, but one that’s worthy of joining the large canon that already includes such shows as Kiss Me, Kate, West Side Story, Your Own Thing, and Two Gentlemen of Verona. The plot revolves around Shakespeare’s wife Anne Hathaway -– an annoyingly affected Cassidy Janson on this recording — trying to convince her begrudging husband, suavely sung by Oliver Tompsett, to change the ending of his new play, Romeo & Juliet, to let the leading lady live and reclaim her power. The story is told in a very modern way by using the music of pop songwriter Max Martin, who has penned hits for Britney Spears, Katy Perry, Taylor Swift, et al. These songs fit very smoothly into the plot but, of course, you won’t get much of a sense of that from the cast album. On that note, any recording of a jukebox musical prompts the same question: Without a script attached, is it worth hearing musical theater artists perform pop songs that we already know and love in their original versions? In one case here, at least, the answer is very much “yes”: From the first time we hear Miriam Teak-Lee as Juliet in the album’s third track, “…Baby One More Time,” to her final, soaring harmonies in “Roar,” it’s clear that she possesses the ability to wrap her voice around the riffs and the admittedly 1D emotions of these songs. Other performers, especially the butter-voiced Jordan Luke Gage as Romeo, do well also, though the comically exaggerated performances of Melanie LaBarrie as the Nurse and David Bedella as Lance De Bois, the strict father of Juliet’s new love interest, seem to have gotten a bit lost in translation to the medium of an audio recording. A bonus cover of “One More Try” by Jessie J accents the disparity between pop and theater voices that only Teak-Lee bridges with complete success. If this cast album can’t offer a good picture of the wit, the positive themes, or the spectacle of & Juliet, what it does offer is a veritable candy box of rich orchestrations and strong singers that may leave listeners saying, to quote a song that’s repeated throughout the show, “I want it that way.” — Charles Kirsch 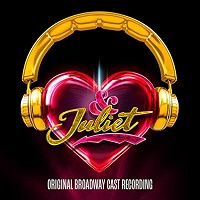 (4 / 5)  Other than the accents, the biggest difference between the two recordings of & Juliet is the use of interstitial dialogue on the Broadway album – or, more accurately, the Toronto album, as that’s where this one was recorded pre-Broadway. (Katy Geraghty, who left the show before it arrived at the Stephen Sondheim Theatre, is still credited here in the role of Lucy). The improvement is tangible, as the snippets of the book that are included give us the context in which the hit songs are used and also play up one of the elements that makes the show as a whole so enjoyable: its humor. Pop song lyrics tend to be somewhat banal, a fact that’s unfortunately accented here because of the slightly more subdued tone of this album as compared to the London one. This is partially due to the sound mixing, which makes the voices slightly softer; but also because of the cast, which, to paraphrase a different show, has its aces in very different places. While Lorna Courtney as Juliet is very talented and adds her own, individual spark to the songs, she’s not quite the exploding firecracker that Miriam Teak-Lee is. Instead, Betsy Wolfe as Anne Hathaway becomes the focus of this album; not only is she a splendid singer, she adds a taste of her enormous acting talent in several sections of spoken dialogue, enough to elevate the material. More happy news is that Philippe Arroyo and Justin David Sullivan as the show’s (arguably) central couple, Francois and May, shine brighter than their London counterparts. Since Wolfe, Arroyo, and Sullivan get to sing most of the quieter pop songs in the score, those moments become the highlights of this recording. (That fact does highlight a structural problem with the album: you’ll often hear one bombastic number right after another, followed by a section in which all you get is the characters’ musical thoughts on frustrated love or identity, the most glaring example being the sequence of songs that stretches from “Whataya Want from Me” to “That’s the Way It Is.”) Melanie La Barrie, the only holdover from the London cast, fares better here, giving slightly subtler and more charming renditions of “Domino” and “Fuckin’ Perfect.” Ben Jackson Walker as Romeo is somewhat generic if inoffensive, and Paulo Szot’s out-of-place operatic voice makes the comedy of Lance really pop. While Stark Sands as a comically smug Shakespeare riffs a bit shakily at the start, in the end he gives a perfectly sweet performance. Fittingly, there’s a new pop-star cover for this album: “Since U Been Gone” as sung by Kelly Clarkson (joined by Lorna Courtney). As of this writing, & Juliet seems to have become a hit on Broadway. Since it’s likely to earn a place alongside Jersey Boys and Beautiful among the most successful of the “jukebox musicals,” any theater fan should get to know it now — and they’re advised to use this recording to help.  — C.K.