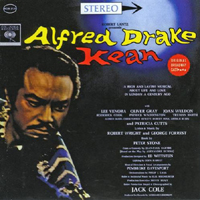 (5 / 5) Some people may think of Robert Wright and George Forrest as mere “adapters” because the team famously took the works of classical composers and massaged them into such musicals as Song of Norway and Kismet, but here’s proof positive that they could craft their own wonderful music and lyrics. Based on a play by Dumas, the show tells a somewhat true version of the life story of the man who at one time was considered Britain’s greatest actor, Edmund Kean. In the title role, Alfred Drake is in top form as he delivers the romantic ballads “Sweet Danger” and “To Look Upon My Love” and the comedic “Civilized People,” proving again that he could do it all. As for the song “Elena,” had that name been as popular in 1961 as Maria was in 1957, the Kean tune might have become as popular as that little number from West Side Story. There’s much more to like here, including the rollicking “The Fog and the Grog,” the swirling waltz “Swept Away,” and, in “Penny Plain, Twopence Colored,” the most glorious melisma in all musical theater — six measures long, and exquisitely sung by Alfred De Sio. Finally, Drake gets to put over a highbrow answer to “Rose’s Turn” in “Apology,” crafted by the songwriters and librettist Peter Stone. Kean is an underrated musical that’s worth a listen. — Peter Filichia