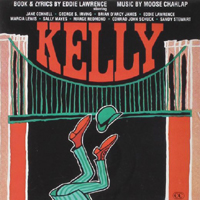 (1 / 5) Kelly closed on its opening night, and this latter-day studio recording shows why it was one of the biggest flops of the 1960s. Eddie Lawrence’s book focuses on the title character, who plans to jump off the Brooklyn Bridge for fame and profit, but the sketchy notes in the CD booklet provide few clues as to how the plot develops. The score, by Lawrence and Moose Charlap, is a raucous evocation of 1880s New York that reaches for a Brecht-Weill astringency without achieving it. There is a standout in “I’ll Never Go There Anymore,” an ambitious musical-dramatic scene with a haunting melody. In the roles of Kelly and his love interest, Angela, Brian d’Arcy James and Sally Mayes make their material seem better than it is. (Mayes shares Angela’s numbers with pop singer Sandy Stewart.) Lawrence himself appears in several numbers, and there are contributions from solid pros Marcia Lewis, Jane Connell, Conrad John Schuck, and George S. Irving, although they’re pretty much defeated by the generally monotonous melodies and sub-par lyrics. A bonus track features Stewart in a lovely 1965 rendition of “I’ll Never Go There Anymore.” — David Barbour