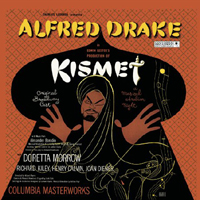 (5 / 5) Based on music by the Russian composer Alexander Borodin, this is the classic Arabian Nights musical. Starring the magnificent Alfred Drake as Hajj the poet, Kismet is one of the greatest cast albums ever recorded — unsurpassed and indispensable. The show is a poetic fantasy about fate, an almost operatic treatment of the belief that a man can control his own destiny through industry and wit. Drake is at the height of his powers here, his every moment of brio, wisdom, and romantic musicality bursting from this excellent-sounding monophonic recording. Seldom has a score been as well conducted as this one is by Louis Adrian. Drake’s exceptional performance is ably supported by Richard Kiley as the Caliph, with his rich, sexy baritone voice. Soprano Doretta Morrow is lovely in “Baubles, Bangles, and Beads,” “And This Is My Beloved,” and Marsinah’s other musical moments. The amazing Joan Diener is on hand to hit Lalume’s numbers out of the park; her vocal gymnastics in “Not Since Nineveh” still can make jaws drop. And Henry Calvin is powerful in “Was I Wazir.” Through the genius of Robert Wright and George Forrest, Borodin’s melodies have been transformed into great musical theater songs. The team’s lyrics still crackle with the intelligence, wit, and craft of a Cole Porter or Stephen Sondheim. The few melodies that Wright and Forrest created from scratch, such as “Rahadlakum” and the bridge to “Stranger in Paradise,” are so excellent and so authentic-sounding that they combine seamlessly with the Borodin music. — Gerard Alessandrini 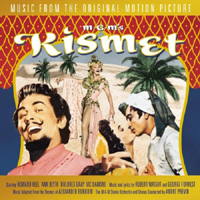 (4 / 5) When the movie version of Kismet hit the Cinemascope screen, the results were pallid compared with the spectacular stage production, but the film soundtrack is a triumph. The music is conducted by the young André Previn, who during his singular career was noted as a symphony orchestra conductor, composer, pianist, etc. Having already musically supervised several MGM films, Previn knew how to enhance the glitzy elements of the Kismet score. Rhino’s expanded soundtrack CD is a fabulous treat. It even includes “Rhymes Have I,” recorded by Howard Keel and Ann Blyth but deleted from the film, along with the reprise of “Fate” and the “Dance of the Three Princess of Ababu.” Keel and Blyth are nearly as good as Alfred Drake and Doretta Morrow on the Broadway cast album, while Dolores Gray surpasses all other Lalumes; she brings tremendous color and vivacity to “Not Since Nineveh,” and her delivery of the song “Bored” (which was not in the Broadway show) is smooth and sensual. Gray’s chemistry with Keel is titillating, and their “Rahadlakum” duet is wonderfully erotic. The only disappointing selection on this recording is the score’s most famous song, “Stranger in Paradise.” It’s conducted at a very slow tempo, and Vic Damone as the Caliph croons and slides through this operatic ballad as though he’s singing in a wee-hours piano bar. Furthermore, when Blyth joins Damone for the second chorus, she sounds precious and stilted. Even the arrangement of the number is lethargic. But, other than this one misguided performance, the soundtrack is highly recommended as a companion to the original Broadway recording. — G.A. 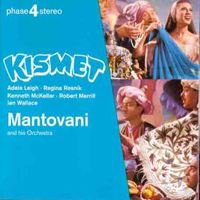 (4 / 5) The popular conductor Mantovani received top billing when this album was released, but he isn’t the only star here. Opera great Robert Merrill sings Hajj to great effect, and diva Regina Resnik is Lalume. This Kismet has a very “classical” sound, yet the nuances of musical comedy are intact, as the performance captures both the lyrical and showbiz glitz elements of the show. Merrill handles the big baritone passages and witty patter songs of his role equally well; next to Alfred Drake, he’s the best Hajj on records. Resnik’s “Not Since Nineveh” may be a bit high-toned, but she is nonetheless sexy and fun. Adele Leigh and Kenneth McKellar show off their lovely, operetta-style voices in “Stranger in Paradise” and “This Is My Beloved.” This was the first stereo recording of Kismet to be commercially released, and it definitely measures up to more recent digital recordings of the score. — G.A. 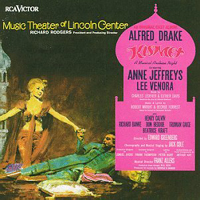 (4 / 5) Recorded in beautiful stereo, this Kismet boasts the show’s original star, Alfred Drake. It’s a joy to hear him recreate his most colorful role, and the elapsed years only add further expertise to his performance. One difference between this recording and the 1953 Broadway album is that the thrilling overture has been replaced by a watered-down section of Borodin’s “Polovtsian Dances.” Still, Franz Allers’ conducting certainly has musical expertise. Most of the supporting cast is excellent, particularly Lee Venora as Marsinah. Anne Jeffreys, a major musical theater talent who rarely had the good fortune to be recorded, is Lalume; although not as witty as Joan Diener in the role, she has a versatile voice, and she gets to sing the sensual “Bored.” As for the Caliph, Richard Banke displays a wonderful tenor in his renditions of “Stranger in Paradise” and “Night of My Nights.” On the whole, this is a more intimate statement of the score than the original cast album and is fine as a second choice for your collection. — G.A. 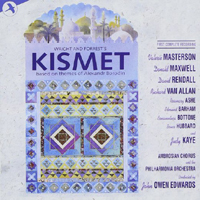 (2 / 5) This is a nearly-complete British studio recording of Kismet. Although parts of the score may benefit from a semi-operatic interpretation of the Borodin melodies, the performance is stodgy and lacks presence. The brassy Broadway elements of the score are sabotaged and, as a result, those sections simply seem old-fashioned. The usually wonderful Judy Kaye displays a certain amount of showbiz flamboyance as Lalume, but even she sounds too cautious. Donald Maxwell, Valerie Masterson, and especially David Rendall are first-rate singers, yet they all sound too stuffy for the score’s witty numbers and sensually romantic ballads. The fabulously talented Rosemary Ashe is fine in the small role of Ayah, momentarily bringing the proceedings to life. John Owen Edwards’ conducting is rather sloppy and never bouncy. The only real recommendation of this recording is the inclusion of five Wright-Forrest songs from Timbuktu, a 1979 rewrite of Kismet. Also included is “Bored” from the film version, here sung by Judy Kaye. — G.A. 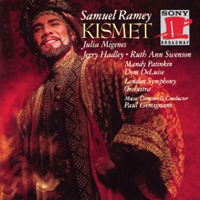 (3 / 5) The colorful, vocally demanding role of Hajj the poet is taken here by opera star Samuel Ramey. His expansive bass sounds thrilling in “Fate,” “The Olive Tree,” and the rest of Kismet‘s more legit-type numbers, but his stalwart style leaves something to be desired in such lighter songs as “Rhymes Have I” and “Gesticulate.” On the other hand, Julia Migenes is equally at home in opera and musical theater; her performance as Lalume is vocally spectacular and loaded with sex appeal. Jerry Hadley, as the Caliph, has a magnificent voice, but his interpretations of “Stranger in Paradise” and “Night of My Nights” are more stilted than romantic. Ruth Ann Swenson is far more successful as Marsinah; her gorgeous rendition of “Baubles, Bangles, and Beads” is a highlight of the disc. Dom DeLuise is an amusing Wazir, and Mandy Patinkin does a weird cameo as the “Marriage Arranger,” singing his number in falsetto. Broadway veteran Paul Gemignani conducts expertly. — G.A.