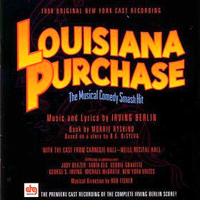 (3 / 5) This is a biting and funny satire of Louisiana’s byzantine politics in general, and of Huey Long in particular. Although Louisiana Purchase opened on Broadway in 1940 with a delightful sung disclaimer that all of its incidents were fictitious, composer-lyricist Irving Berlin and book writers Morris Ryskind and B. G. DeSylva — and, no doubt, delighted theatergoers — reveled in the show’s doses of reality-based topical material. This spirited musical had to wait more than a half-century for a recording. Fortunately, the wait was worth it. Based on a concert presentation at Weill Recital Hall in New York City, here’s a zingy and infectious performance that is more than complete; a number of cut songs, some of them quite good, were reinstated. (Who besides hard-core scholars knew of “I’d Love to Be Shot From a Cannon With You?”) Michael McGrath is aces as the wisecracking hero, Judy Blazer (with a hilarious German accent) makes a good partner for him, and veteran George S. Irving is predictably excellent in the role originally played by Victor Moore. Another veteran, Taina EIg, is charming if perhaps less assured than her part’s creator, Irene Bordoni. In a role that’s more Greek chorus than integral character, Debbie Gravitte offers some fine Broadway “can-belto.” Score-wise,this is not Annie Get Your Gun or  As Thousands Cheer, but it’s a lot of fun. — Richard Barrios