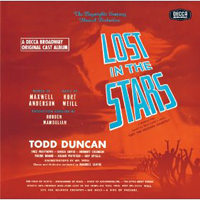 (3 / 5) Lost in the Stars, by playwright Maxwell Anderson and composer Kurt Weill, deals with racial discrimination and segregation — unlikely territory for a Broadway musical in 1940s America. With its operatic dimensions and somber tone, the show elicited mixed but largely approving notices. Weill and Anderson based their work on Alan Paton’s Cry, the Beloved Country, a 1948 novel that contrasts the natural beauty of South Africa with the brutality of its apartheid policy. As in the novel, the protagonist is a Zulu (played by Todd Duncan) ordained to the Anglican priesthood, whose son kills a white man in the course of committing a robbery and is tried for murder, convicted, and hanged. The story concludes with the reconciliation of two bereaved fathers, the black priest and the white man whose son was killed. Anderson’s Iibretto and Weill’s magnificent score take liberties with Paton’s material; in fact, after seeing Lost in the Stars, the novelist wrote that he regretted giving its adapters the rights to his book. The musical featured a Greek chorus narrating and commenting on the action. Virgil Thomson, in his review for the New York Herald Tribune, Virgil Thomson called the show a singspiel; the chorus performs an inordinate amount of the score, leaving little for the principals to do. The recording contains about 45 minutes of music, with Maurice Levine conducting a 12-piece chamber ensemble, orchestrations by Weill. The spoken dialogue is somewhat wooden, and some of the singing is weak.  — Charles Wright 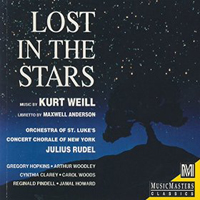 (4 / 5) As general director and principal conductor of the New York City Opera in the late 1950s, Julius Rudel rescued Lost in the Stars from obscurity by introducing it into his company’s repertoire. Thirty-five years later, Rudel conducted this definitive recording of the beautiful Weill-Anderson score. Leading the Orchestra of St. Luke’s, he utilized more musicians than Weill ever envisioned, and he searched the worlds of opera and musical theater to find a dream cast. Notable among the vocalists are Arthur Woodley, who not only sings exquisitely but also brings poignancy to Stephen Kumalo’s Act II soliloquy; Cynthia Clarey, who renders “Stay Well” and “Trouble Man” with tenderness; and Carol Woods, who belts “Who’ll Buy?” with flair. But the true stars of this recording are the members of the Concert Chorale of New York and tenor Gregory Hopkins as chorus leader. While the original Broadway album retains considerable historical interest, the superior vocalism and the ample orchestral sound of Rudel’s studio version eclipses the earlier release. — C.W.