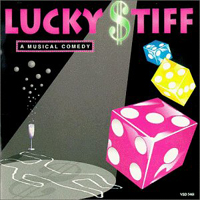 (3 / 5) “Promising” is the obvious word for Lucky Stiff, the first produced musical by composer Stephen Flaherty and lyricist Lynn Ahrens, but that would sell it short. It’s also professional, assured, and entertaining, if not entirely successful. The show tells the trivial story of a meek British shoe salesman who will inherit six million dollars if he agrees to take his uncle’s corpse, in a wheelchair, for one last holiday in Monte Carlo. The two are pursued (and occasionally kidnapped) by all kinds of people who, essentially, want the salesman’s money, although the pursuers each have their own particular farcical motivation. Perhaps because there’s so much convoluted plotting and exposition in this show, it’s hard not to wish that the score was a little less “integrated.” The songs are occasionally so busy doing plot work that they aren’t as much fun as they might have been. Still, they exhibit genuine skill and craft. Flaherty’s great gifts for melody and humor are already clearly in evidence, and some of Ahrens’ neatest and most effortless lyrics are to be found here. Partly because the characters are broad but not terribly rich, the accomplished farceurs who make up the cast don’t get the kind of musical moments that would elevate this show to another level, but the redoubtable Mary Testa, Evan Pappas, Judy Blazer, and Debbie (Shapiro) Gravitte come close. — David Wolf 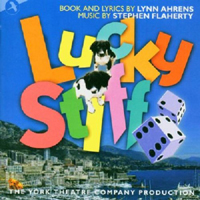 (3 / 5) This recording, which followed a five-performance “Musicals in Mufti” run of Lucky Stiff at the York Theatre, is better than its predecessor. The first recording was made years after the show had closed at Playwrights Horizons, without the participation of the director and with only a few of the original performers; this one has much more of a real cast album feel to it, with a company that had recently been through rehearsals and performances together. In fact, six of the 10 cast members here were also in the first production, though only two of them are heard on the original recording. All of their performances are looser, less frantic, and funnier this time around, with Mary Testa unleashed riumphantly. Among the newcomers, Janet Metz and Malcolm Gets make an appealingly believable leading couple, even if his British accent is a sometime thing. Musical director David Loud’s single-piano accompaniment is more attractive than the elaborate orchestrations of the first recording, which too often strain for comic effect. The material is mostly the same on both albums, though this one has a little more spoken dialogue, as well as the previously unrecorded Act I finale and “A Woman in My Bathroom.” In a bonus track, we get the charming “Shoes,” which was cut from the show. Both CD booklets feature uncommonly ugly cover art. — D.W.