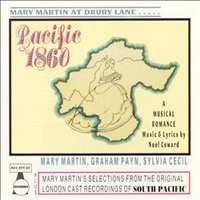 (3 / 5) Noël Coward’s overstuffed postwar operetta plunked a visiting diva among some missionaries on the island of Samolo. The show failed to ignite the box office, even with Mary Martin in her London debut. But the attractive score contains Sir Noël’s singular lyrics and some original touches. It opens with two trenchantly satirical songs, “His Excellency Regrets” and “Uncle Harry.” But then there’s the unwittingly hilarious ensemble song “Fumfumbolo,” wherein Brit missionaries get down with the natives. The cast album covers nearly the entire score. Martin is at her vocal peak — hitting fine coloratura notes, donning a credible British accent, and outclassing her leading man, Graham Payn. Bonus tracks present a few songs from South Pacific as performed by Martin and Wilbur Evans, her co-star in the London production of that Rodgers and Hammerstein hit. The only drawback to the CD is the sound quality; the notes claim that the original recordings were “digitally edited and remastered,” but large swatches of the lyrics remain unintelligible. — Marc Miller