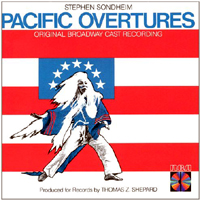 (5 / 5) Only Harold Prince and Stephen Sondheim could find musical possibilities in the opening up of Japan to the West in 1853. Only Sondheim could make such a brilliant score out of such material, and only Prince would have the nerve to produce the show on Broadway. Pacific Overtures is based on a play by John Weidman about East-West diplomacy. (Hugh Wheeler provided additional book material.) Add a production utilizing Japanese theater techniques and (until the finale) an all-male, all-Asian cast, and you have a perfect recipe for box office poison. Although she show didn’t last beyond a few months on Broadway, it has a unique, brilliant score with clever, pointed lyrics set to austerely beautiful melodies informed by Japanese harmonies. Some numbers, such as “There Is No Other Way” (a tense exchange between a fearful wife and her husband) and “Poems” (in which two men trade haikus) are tersely eloquent, aided by Jonathan Tunick’s fine orchestrations. But the score also contains two of Sondheim’s most elaborate set pieces: “Someone in a Tree,” which recounts a treaty signing from multiple points of view, demonstrates that history is in the eye of the beholder; “Please Hello,” in which Japan is invaded by diplomats from abroad, blends pastiches of various musical genres into a scalding satire. The final number, “Next,” brings the story up to the present day, and is devastating in its irony. On this excellent recording, the original cast, led by Mako and Sab Shimono, performs with notable skill. Sondheim may have written more moving scores, but none surpass the glittering intelligence and excitement of his work here. — David Barbour 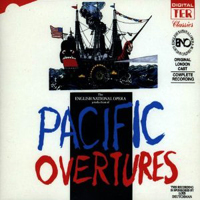 (2 / 5) Complete to the last word and note, this recording of the English National Opera production of Pacific Overtures offers the entire show, with its lengthy dialogue included. It may be archivally important, but it’s an uphill battle for the average listener. The non-musical sequences are tedious and lacking in authenticity, and the score, with its intensively rhymed lyrics, doesn’t really call for the skills of opera singers. Still, the cast sings well, and the recording includes material not heard on the Broadway cast album, such as the Kabuki lion dance that ends Act I. This version of “Next” updates the song to the late 1980s with new spoken lines that make ironic reference to Pearl Harbor. There is also some startlingly effective work from the percussionists in the orchestra. — D.B.