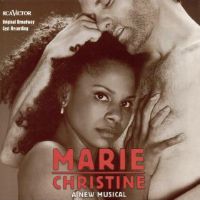 (3 / 5) Michael John LaChiusa turns out songs quickly — so quickly, he boasts, that he can sometimes knock off several in a day. There’s nothing necessarily wrong with that, but it is a problem when the songs don’t sound so much effortless as hurried, and there’s a strong whiff of that here. LaChiusa has a gift for ravishing melody, but he cuts corners by not bothering to develop the themes and motifs into rounded songs. Seemingly allergic to the traditional 32-bar structure, he prefers to construct his scores as ever-evolving fragments of music. Sometimes it works, and sometimes it can strike the listener as continual songus interruptus. Some parts click and other parts don’t in Marie Christine, a transplant of Euripides’ Medea to New Orleans and Chicago at the turn of the 19th century. The murderous mom here is a Creole with magical powers, who gets involved with a politically ambitious man. When the cad realizes that the liaison could stymie his career, he dumps Marie Christine for a politico’s daughter, and suffers the dumpee’s wrath. LaChiusa’s great fortune is in having Audra McDonald apply her gorgeous voice to his concoctions. She sings beautifully in “Beautiful” and tops herself in a flowing chanson titled “C’est I’amour.” Also shining like diamonds in a flawed setting are Darius de Haas in “Complainte de Lord Pierrot” (from a Jules LaForgue poem), and the always lusty Mary Testa as a toddlin’ town madam. The orchestrations, subtle and authoritative throughout, are by Jonathan Tunick. — David Finkle