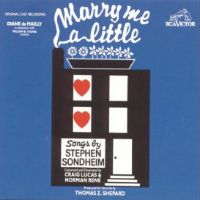 (1 / 5) Stephen Sondheim compilation shows have always seemed silly to me. Doesn’t the appeal of his work lie largely in its specificity? The original cast album of Marry Me a Little is one of the most plodding, monotonous, and annoying recordings of Sondheim’s songs ever released. The show doesn’t have much of a story, but it does have a concept: On a Saturday evening, a man (played by Craig Lucas) and a woman (Suzanne Henry) who don’t know each other (and who never meet) sit home in their respective apartments and sing Sondheim songs. Among them: “Can That Boy Foxtrot!” and “Uptown, Downtown” (both cut from Follies), the title song and “Happily Ever After” (both cut from Company, although “Marry Me a Little” has been reinstated for subsequent productions of that show), and “There Won’t Be Trumpets” (cut from Anyone Can Whistle, but reinstated for various revivals and concert presentations of that show) . These items are interesting and worth knowing, but that doesn’t mean they work in this context.  That said, the only truly unbearable section of the album is an insufferable combination of “All Things Bright and Beautiful” (Follies) and “Bang!” (A Little Night Music). Although the singing voices of Lucas and Henry are generally lacking in distinction, these two do a somewhat better job in other numbers — but they’re never aided by the cool, impersonal, distant-sounding accompaniment of a lone piano. — Matthew Murray