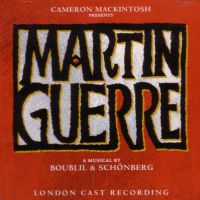 (4 / 5) By the time this latest epic from composer Claude-Michel Schönberg and lyricist Alain Boublil arrived on the scene, the serious pop-opera genre was fading away. That’s too bad, as this is one of the best scores of its type. The book for the show, also by Boublil & Schönberg, was inspired by a historical incident best known for its dramatic treatment in the film The Return of Martin Guerre. The title character, a 16th-century French farmer, is forced into marriage with a young woman, Bertrande, in order to consolidate their Catholic families’ hold on their farmland near the village of Artigat. The marriage is a disaster and produces no children, so Martin runs off to war. Seven years later, he apparently dies on the battlefield. His companion-in-war, a man named Arnaud, subsequently visits Artigat and is mistaken for Martin. Then Arnaud falls in love with Bertrande. This tale of deception is set against a background of smoldering conflict between Catholics and Protestants. It’s a grim piece, carried along by the sweep of Schönberg’s frequently ravishing melodies. Boublil’s lyrics — translated by Herbert Kretzmer, Edward Hardy, and Stephen Clark — are often cruelly pointed, and they serve the story well. The best numbers include the title song; “Here Comes the Morning,” a duet for Martin and Arnaud; “Tell Me to Go,” Arnaud’s plea to Bertrande; and the stunning choral number “The Imposters.” These and some grandly scaled orchestral interludes give Martin Guerre the scale of a true opera. (Skip the one egregious attempt at humor, “Sleeping on Our Own,” delivered by a trio of comic crones.) As Arnaud and Bertrande, lain Glen and Juliette Caton sing beautifully. They receive strong support from Matt Rawle in the title role and Jérôme Pradon as Guillame, who loves Bertrande from afar. — David Barbour 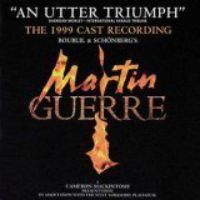 (3 / 5) After Martin Guerre failed in the West End, producer Cameron Mackintosh tried again. He had Boublil and Schönberg create a new touring version that represents one of the most extensive overhauls of any musical. Even though it follows the same general plot line, it’s an almost total rewrite, with many new songs and with melodies from the 1996 version reassigned and given new lyrics. The result is harsher, focusing even more on the religious strife that’s tearing Artigat apart. If at times the score is shrill, even hysterical, there’s plenty of dramatic power here. Alas, Stephen Clark alone translated the lyrics for the revised show, and they’re much weaker. For example, the new ballad “Live With Someone You Love” is a thesaurus of clichés. On the other hand, “Without You as a Friend” is a canny addition to the score. The title song and “The Imposters” are both still here (albeit with new lyrics), along with many other effective numbers, but William David Brohn’s orchestrations lack majesty. The new cast — Stephen Weller as Martin, Matthew Cammelle as Arnaud, Joanna Riding as Bertrande, Maurice Clark as Guillaume — is vocally skilled and dramatically apt. — D.B.