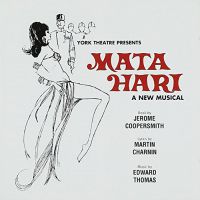 (4 / 5) The legendary 1967 out-of-town closing performance of this show is notorious for its title character, played by one Marissa Mell, being shot by a firing squad, falling, dying — and then rubbing her itchy nose when she was supposed to be stone-cold dead. In a strange way, Mell’s move has proven to be a good metaphor for this musical, which has refused to die. In 2001, the cast of the York Theatre Company revival recorded the stirring score — unfortunately, with synthesized accompaniment. (No show should use synthesizers if it’s set in an era before synthesizers were invented!) But even those machines can’t destroy Edward Thomas’s strong melodies, which are wed to deft, incisive lyrics by Martin Charnin. Mata Hari (Robin Skye) has a terrific opening song, “Everyone Has Something to Hide,” and the equally effective “Not Now, Not Here.” Captain LaFarge (Michael Zaslow), her would-be capturer/romantic interest, has the pungent “Is This Fact?” and the wistful “How Young You Were Tonight.” The jewel of the score is “Maman.” If only it didn’t sound like the singers were accompanied by automobile horns! — Peter Filichia