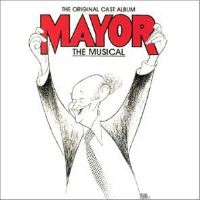 (2 / 5) When Bye Bye Birdie exploded on Broadway in 1960, it was an announcement that a brand-new generation had arrived in just about every department. Since then, composer Charles Strouse has had an interesting time of it. He has written the music for more shows than any of his contemporaries, and while most of them were box-office failures, his three big hits — Bye Bye Birdie, Applause, and Annie — have more than made up for the missteps. And even his flops have been filled with terrific songs. That said, Mayor has what may be the least interesting tunes of Strouse’s career. Based on New York City mayor Ed Koch’s book of the same title, and produced while he was still in office, the musical doesn’t take advantage of the spikiness of Koch’s personality; it’s a bland, fairly generic revue that covers familiar NYC subject matter, attitudes, and stereotypes. Unusually, Strouse wrote his own lyrics for this show, and they’re okay, but there’s not much in the way of a fresh point of view here. The book is by Warren Leight, who won a Tony Award for his play Side Man 14 years later. — David Wolf