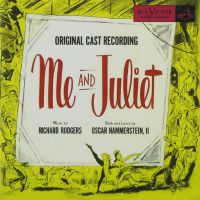 (3 / 5) It’s hard to believe, but Rodgers and Hammerstein did have a few flops in addition to their many hits. Me and Juliet was one such failure, and the team’s only foray into the backstage musical genre. Still,  even this score contains flashes of brilliance. “Marriage Type Love” is a tuneful charm song with a wonderfully romantic lyric, while “That’s the Way It Happens” has just the right pithiness and nonchalance that’s called for. Probably the best and most famous item in the show is “No Other Love,” based on a theme that Rodgers originally wrote for the background score of Victory at Sea, a television documentary on World War II. It’s a lovely song with a beguiling melody, even if it is indicative of the non-character-specific writing in Me and Juliet. Many of the songs are misfires, particularly “We Deserve Each Other” and “Keep It Gay,” both of which are leaden. There is one showbiz-themed song that succeeds: “Intermission Talk.” Isabel Bigley as Jeanie heads the cast, fresh from her starring role in Guys and Dolls; Bill Hayes displays a very appealing voice as Larry; and Joan McCracken as Betty steals the show with her special brand of sassiness. — Gerard Alessandrini