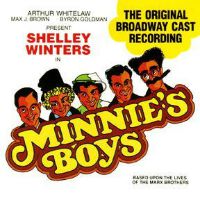 (2 / 5) “Good MORN-ing, ladies!!” Shelley Winters’ entrance line in this musical biography of the Marx Brothers and their indomitable mother is brayed rather than spoken, and most of her subsequent readings on this shrill cast album are snorted rather than sung. Winters had sung before –she was a replacement Ado Annie in the original Oklahoma! — but she’s hoarse here, and more pushy than the role requires. The part, a Mama Rose lite without subtext or character growth, ultimately defeats the star. Other components of this Larry Grossman-Hal Hackady work, their first for Broadway aside from a couple of revue songs, are tuneful if frequently mired in showbiz cliché: Harpo’s (Daniel Fortus’s) love ballad to his mother, “Mama, a Rainbow”; a wry brothers’ lament, “Where Was I When They Passed Out Luck?”; and father Frenchie’s (Arny Freeman’s) torch song “Empty,” cut before opening night but included here. A duet between Lewis J. Stadlen as Groucho and Julie Kurnitz as a Margaret Dumont type is glorious, and an ambitious finale depicting the progression of the brothers’ characters gets an “A” for effort. But the score lacks a certain something, and it’s not well supported by garish orchestrations that are, shockingly, the work of the great Ralph Burns. — Marc Miller