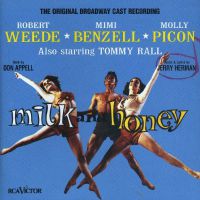 (3 / 5) Jerry Herman’s first Broadway score is surely one of his best, an atmosphere-soaked tour through contemporary Israel in service of a tired soap opera plot. At age 30, Herman was already a melody master. Note his gift for well-judged production numbers (the minor/major-key intricacies of “Independence Day Hora”), stirring title songs (dancer-singer Tommy Rall delivers this one with vigor), 11-o’clock showstoppers (“Hymn to Hymie,” with Molly Picon socking across a funny lyric), and warmly appealing ballads (the ardent, chromatic “There’s No Reason in the World”). The orchestrations, by Eddie Sauter and Hershy Kay, are more interesting than those that Herman’s scores generally commanded — even his bigger hits. Robert Weede, fresh from The Most Happy Fella, could still play an aging romantic lead with the best of them. Unfortunately, this time he has less to play off of; leading lady Mimi Benzell is vocally precise but terminally dull, and she doesn’t let her hair down even when the lyrics demand it. The whole album feels a little hurried, incomplete, and short on dance interludes. But Herman comes out swinging: The opening number, “Shalom,” announces an extremely promising Broadway songwriter. That was this score’s hit song, but there’s plenty more to appreciate here.  — Marc Miller