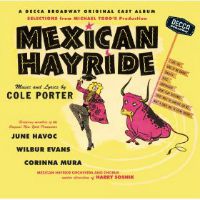 (3 / 5) Cole Porter, Herbert Fields, and Dorothy Fields enjoyed a long run with this silly piece of wartime escapism, but the major force behind the show was producer Mike Todd. First, he saturated the stage with showgirls. Then he got Porter to write a song about them for the stolid baritone Wilbur Evans to sing — “Girls (to the Right of Me, Girls to the Left of Me)” — while the chorines wiggled and shrieked around him. Disappointingly, the show’s star, the great comic Bobby Clark, is absent from this 21-minute cast album. The lead female comic, June Havoc, plays a lady bullfighter and gets to wail Porter’s “Count Your Blessings” (about the advantages of death), “There Must Be Someone for Me” (a Porter list song), and “Abracadabra.” Like so many 1940s comediennes, Havoc sounds hoydenish and too pleased with herself, bur such was the style. Evans drones the hit ballad “I Love You” without inflection, but the chorus scampers through “What a Crazy Way to Spend Sunday,” and Corinna Mura hits stratospheric notes with ease in “Sing to Me, Guitar” and “Carlotta.” While none of the material is classic, Decca’s recording of highlights conveys the incidental charms of a loud, throw-it-in-if-it-works, wartime success. As musical theater, it’s forgettable; as a crash course in tired-businessman entertainment of the period, it’s peachy. — Marc Miller