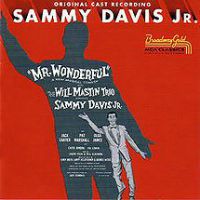 (4 / 5) From the moment the overture fires up, strings sawing away and trumpets blaring, you know that this is a mid-’50s schlock musical comedy. Produced (but not written) by Jule Styne to showcase the talents of Sammy Davis Jr., Mr. Wonderful leaves no convention unturned: There’s the frantic opening chorus (“1617 Broadway”), the second couple’s silly duet (“Without You I’m Nothing”), Davis’s swinging nightclub specialty (“Jacques D’Iraq”), the leading lady’s adoring title song, the comedienne’s pointless choral ensemble (“Miami”), and the other comedienne’s irrelevant song and dance number (“I’m Available”). Davis’s socko 11-o’clock number is actually an old standard pulled out of the trunk (“Sing, You Sinners”). Act II is basically the star’s nightclub act, so how much story has to be told? What makes all of this special is the cast. That “I’m Available” comedienne just happens to be Chita Rivera. The other comic gal is Pat Marshall, so funny and leather-lunged that you wonder why she didn’t have more of a career. (Answer: She married Larry Gelbart and lived happily ever after.) Davis’s love interest, Olga James, displays a sweet soprano, but she can also wow us when given good comedy material (“Talk to Him,” “I’ve Been Too Busy”). And there are some good, tuneful songs here; the score is by a young Jerry Bock and George David Weiss. As for Davis, he’s so eager to show off his versatility — tapping, doing impersonations, hard-selling the hit song “Too Close for Comfort” — that he’s almost frantic. But it’s pleasing how little fuss is made about having a black leading couple (Davis-James), a white second couple (Marshall-Jack Carter), and making them all best friends. If you love the sound of boilerplate musical comedy from the Golden Age, here’s a Grade-A specimen. If not, downgrade the rating to three stars. — Marc Miller