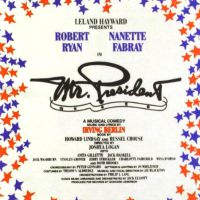 (1 / 5) Irving Berlin’s final show should have been a natural. It’s a look at a JFK-like First Family, with mild social satire and plenty of flag-waving. Unfortunately, from the listless opening fanfare to the desperate finale, it’s a bust. There’s scarcely a fresh idea in Mr. President, just a lot of recycling of old ones that were better executed by Berlin the first time: the latest dance craze (“The Washington Twist”), the contrapuntal duet (“Empty Pockets Filled With Love”), and the novelty number to wake up a drowsy Act II (“The Only Dance I Know”). In a nod to a song from Annie Get Your Gun, one character even announces, “The girl that I marry will have to be / Meat and potatoes, potatoes and meat like me.” (Huh?) Robert Ryan’s light tenor hardly conveys Chief Executive authority. As his First Lady, Nanette Fabray — always a pro — puts over “Let’s Go Back to the Waltz” and “They Love Me.” First Daughter Anita Gillette is fine in “The Secret Service.” The rest of the score is a major disappointment, and the Broadway talent delivering it has no chance against such feeble material. Not even Philip J. Lang’s orchestrations can spark the dispiriting arrangements; these songs just end. — Marc Miller